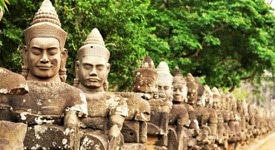 Day 1: Upon arrival in Phnom Penh International and transfer to your hotel. Visit the Royal Palace, built by King Norodom in 1866 on the site of the old town, and the Silver Pagoda. Located within the grounds of the Royal Palace, the Silver Pagoda is so named because of its floor, which is made up of 5000 silver tiles. The treasures include a solid gold Buddha encrusted and weighing 90 kilos and a small 17th century emerald and baccarat crystal Buddha. Enjoy a cruise on the Mekong and Tonle Sap Rivers.Overnight at hotel in Phnom penh.

Day 2: In the morning, visit the Notorious Tuol Sleng Museum. In 1975 Tuol Svay Prey High School was taken over by Pol Pot’s security forces and turned into a prison known as Security Prison 21 (S-21). It soon became the largest such center of detention and torture in the country. More than 17.000 people held at S-21 were taken to the extermination camp at Choeung Ek to be executed; detainees who died during torture were buried in mass graves in the prison ground. The museum displays include room after room of these photographs of men, women and children covering the walls from floor to ceiling; virtually all the people pictured were later killed. Continue to the nearby National Museum. Built in 1917 it is an exceptional example of traditional architecture and is exclusively devoted to preserving and displaying Khmer art and sculptures. Hundreds of pieces are housed here including both pre-and post-Angkorian pieces. Visit the Central Market, another landmark of the city of Phnom Penh.
Afternoon, visit the Russian Market (Psah Tuol Thom Pong), a lively outdoor market where you will find antiquities, silver and gold jewelry, gems, silk, kramas, stone and wood carvings, as well as T-Shirts, CDs and other souvenirs. End your visit of the charming capital with a visit of the Wat Phnom Temple, Phnom Penh’s namesake.  Evening enjoy Cambodian Living Arts Performance Theater On at the same hotel.

Day 3: This morning, transfer to Phnom Penh International Airport for flight to Siem Reap. On arrival, pick up and begin a tour of the temple: visit the Roluos Group. The monuments of Roluos, which served as the capital of Indravarman I (reigned 877-89), are among the earliest large, permanent temples built by the Khmers and mark the beginning of Khmer classical art. Preah Ko erected by Indravarman I in the late 9th century dedicated by the King to his ancestors in 880. Bakong the largest and most interesting of the Roluos group temples, with his active Buddhist monastery just to the north of the east entrance. Lolei built on an islet in the center of a large reservoir (now rice fields) by Yasovarman I, the founder to the first city at Angkor.
In the afternoon, continue your temple tour. See the unique interior brick sculptures Prasat Kravan, the Srah Srang reservoir (known as “The Royal Baths” was once used for ritual bathing), Banteay Kdei(surrounded by 4 concentric walls), Eastern Mebon (guarded at its corner by stone figures of harnessed elephants, some of which are still in a reasonable state of preservation) and the mountain-temple of Pre Rup until sunset. Overnight at hotel in Siem Reap.

Day 4: In the morning, visit the most famous of all the temples on the plain of Angkor: Angkor Wat. The temple complex covers 81 hectares and is comparable in size to the Imperial Palace in Beijing. Its distinctive five towers are emblazoned on the Cambodian flag and the 12th century masterpiece is considered by art historians to be the prime example of classical Khmer art and architecture. Angkor Wat’s five towers symbolize Meru’s five peaks – the enclosed wall represents the mountains at the edge of the world and the surrounding moat, the ocean beyond.
Afternoon, visit the South Gate (with its huge statues depicting the churning of the ocean of milk), the ancient capital of Angkor Thom (12th century), Bayon Temple (unique for its 54 towers decorated with over 200 smiling faces of Avolokitesvara), the Royal Enclosure, Phimeanakas, the Elephants Terrace and the Terrace of the Leper King. Sunset at Angkor Wat. O/n at the same hotel.

Day 5: Transfer to the archaeological site for the sunrise from the Phnom Bakheng, one of two hills dominating the plain of Angkor, from where you will have a spectacular view of the Western Baray and Angkor Wat
Or sunrise at Srah Srang.
Return to the hotel for breakfast.
Morning, transfer to Banteay Srei temple (10th century), regarded as the jewel in the crown of Classical Khmer Art. Continue to Ta Prohm, one of the area’s most beautiful temples. Ta Prohm has been relatively untouched since it was discovered and retains much of its mystery.
In the afternoon, you continue your temple visits to Preah Khan. Built by the King Jayavarman VII, Preah Khan is, like Ta Prohm, a place of towered enclosures and shoulder hugging corridors. Unlike Ta Prohm, however, the temple of Preah Khan is in a reasonable state of preservation and ongoing restoration efforts should maintain and even improve this situation. Neak Pean, a fountain built in the middle of a pool (representing the paradisiacal Himalayan mountain-lake), Ta Som and Banteay Samre, built in the third quarter of the 12th century. It consists of a central temple with four wings preceded by a hall and accompanied by two libraries, the southern example remarkably well preserved. Two concentric walls enclose the ensemble. Evening enjoy a cultural Phare, Cultural Cambodian Circus which is sure to delight the young and old O/na t the same hotel.

Day 6: Visit the floating village of Chong Khneas, located 10 kilometers south of Siem Reap. Visit the village and take an excursion in a traditional wooden boat on the Tonle Sap Lake, the “Great Lake” of Cambodia, one of the largest in Asia. Continue visit to “Les Artisans d’Angkor – Chantiers Ecoles” of Siem Reap and time at leisure at a local market (if time permits). Transfer to your hotel or Siem Reap International Airport for departure flight to the next destination.